The international payments giant TSYS just published its most recent Consumer Payment Choice Study, and found that of all the features consumers want from their payment methods, their highest priority is security. 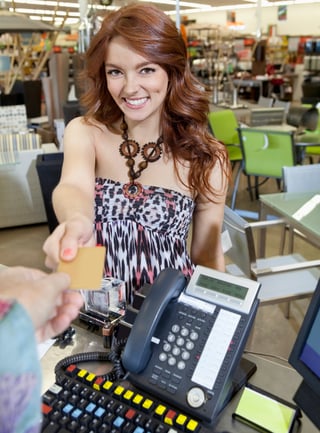 After that comes customer service, and customers have plenty of ideas about what they want. First of all, they won't even look at a credit card unless it has a good rewards program. And despite all we read about privacy, 60% of card holders are fine with letting their bank analyze their spending patterns so it can offer them even better rewards. And "better rewards" doesn't mean better stuff; it means more points for the way they use the card. Over half convert all their points to cash, while fewer than one in ten uses them for travel.

But security concerns carried the day.

The most alarming for merchants has to do with EMV. Today, every merchant in the country is liable for deceitful cards presented at their business, except for EMV-enabled cards they process through a new EMV-enabled terminal. But the study found that 60% of consumers don't have an EMV card, and that of those who do, only half have actually seen and used an EVM-enabled credit card processing terminal.

The demand is there. Almost half said that the chip would make their "payment program more valuable," indicating that demand for security remains central to a card's value proposition. But the issuing banks haven't caught up, even with the industry mandate.

Other payment innovations suffer from the security threat as well. Nearly a third said that they would "never" put their credit or debit card information into a mobile wallet on their phone.

But 54% want to use their smartphone to turn their credit card on and off, and 35% of them already have the app from their bank installed on their phone. They don't do much with it; nearly all of them use it to check their balance, but fewer than half are willing to actually use it for banking -- even for something as insular as making a transfer from one account to another.

Security concerns also contributed to the uptake of PayPal. Over a third of respondents opened a PayPal account in the last year, and half own the PayPal app. By comparison, 27% have Google Wallet, and 22% have ApplePay.

In other words, as the TSYS study put it, people are much more interested in using their phone to "manage fraud."

So long as security remains a top concern of the consumer, large purchases will continue to be made by writing a paper check. The value of each individual check ballooned over the course of the recession, and consumers use them for one out of five purchases over $100. Find out how you can use them to increase sales and mitigate risk here.