Guaranteeing Safety and Profit in the Construction Industry

You know that strict safety practices reduce the risk that an accident will ruin you. But safety comes in many forms, and it can have a radical impact upon your bottom line in ways that may not be obvious.

The voting public has consistently supported regulations designed to protect workers from on-the-job dangers, and the construction industry has embraced this attitude and improved safety constantly for decades.

The results have been phenomenal. In 1972, there were eleven injuries per hundred workers. In 2013, there were three.

Fatalities followed an even better trajectory. In 1970, when there were 100 million fewer Americans, thirty-eight workers were killed on the job every day.

In 2013 that number dropped to twelve.

This success has probably saved a fortune, because the injuries that remain certainly cost one. In 2006, lost productivity alone came to $60 billion, in part because one in four people who missed work were gone for thirty-one days or more. And direct costs set businesses back $170 billion.

The construction industry by its very nature has a large stake in safety. According to OSHA, sixteen percent of workplace fatalities take place on construction sites, coming to a total of 856 in 2013.

In fact, OSHA estimates that if contractors could eliminate the “Fatal Four,” they would save 478 workers every year – more than half the total. The first three Fatal Four accidents are getting caught in-between things, being electrocuted and being hit by something. Those three account for one third of construction fatalities.

The other two thirds result from the fourth one: falling.

And we’re not talking about horrific plunges from a skyscraper’s scaffolding. In fact, a quarter of the fatal falls were from less than ten feet high.

OSHA has tried to address this, but for some reason these regulations meet with industry resistance. You’re supposed to provide conventional fall protection as soon as someone is standing six feet or more above the ground or a lower level of the structure. Usually that means guardrails, safety nets, or a personal fall arrest system.

But contractors – notoriously roofers – consistently flout these regulations. Fatality rates for roofers are the highest in construction, hitting 39 per 100,000 in 2013. Falls cause 80% of the fatalities in the residential roofing industry. 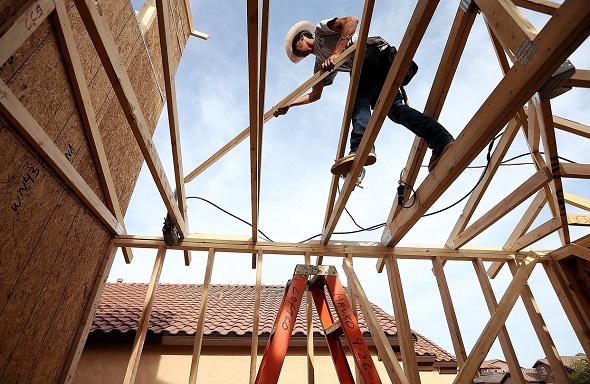 A battle in Arizona sums up the issue. The Arizona chapter of the National Association of Homebuilders lobbied its state government to require fall protection only above fifteen feet, so they could ignore the OSHA regulation while complying with the state one.

During the public input phase of the legislative process some builders claimed that complying with the OSHA standards would run them out of business.

Others said they were already complying and it was no big deal.

The legislature passed the fifteen-foot bill, but by then things were so acrimonious OSHA threatened to take over construction safety in the entire state if they wouldn’t enforce the 6-foot rule.

That’s still playing out, but it’s interesting to note that some contractors testified that they found compliance easy. Perhaps that’s because they found OSHA’s terrifying “$aftey Pays” calculator.

It asks you what your profit margin is and what injury your worker suffered, and then calculates how much it will cost you – and how much business you’ll need to execute in order to break even.

If we assume that “crushing” will result from two of the Fatal Four accidents – getting caught in-between and falling – and that your profit margin is 3%, here’s what one single misfortune might cost you:

In that context, the additional expense for a personal arrest system seems trivial. Same for the lost productivity that will probably arise from using one – even though some roofers find that rope grab systems don’t interfere with work much at all. They do require additional training, because the worker needs to adjust the slack in his safety line as he moves around, but if they prevent just one accident you can imagine that your return on your safety investment would be several thousand percent.

But you can’t control everything. One of the biggest threats to your business, believe it or not, is conflicts between your people. Violence accounted for 1 out of every 6 fatal work injuries in 2013, and there’s just nothing you can do about human nature.

You can, however, protect your business from being held responsible for other people’s mistakes. If you have compliant safety measures in place, train your people to use them and insist that they do, you change the liability equation significantly.

Same goes for your revenue. Taking on the added expense for safety measures, and accepting some impact on productivity as your people integrate it into their workflow, costs you. In the long term, you’ll profit, but in the short term it may seem like an expense.

So protect yourself from bad decisions your clients may sometimes make. Most contractors receive up to seventy percent of their revenue in the form of checks, which means most contractors have had to deal with returned payments now and then.

That’s one risk you can eliminate completely. For less than it typically costs to process a credit card you can get a guarantee on revenue from checks. If one is returned, you get paid anyway. That way you can focus on keeping your business humming along safely, knowing that your bottom line is as safe as your workers.