Heavy equipment is probably not the first thing that comes to mind while considering tourism, sports or groceries, but that equipment certainly plays an active role in each of those verticals. From Snowcats and ice skating rinks to luxury liners and baseball parks, heavy equipment saves time and energy while providing an irreplaceable resource to modern business.

The use of heavy equipment is so ubiquitous in America today that it frequently blends into everyday life unless it becomes weird like dinosaur-shaped sugar cane harvesters or immeasurable like mammoth coal mining cranes. Furthermore, other industries use it in ways that surprise and delight those having a penchant for popular culture. 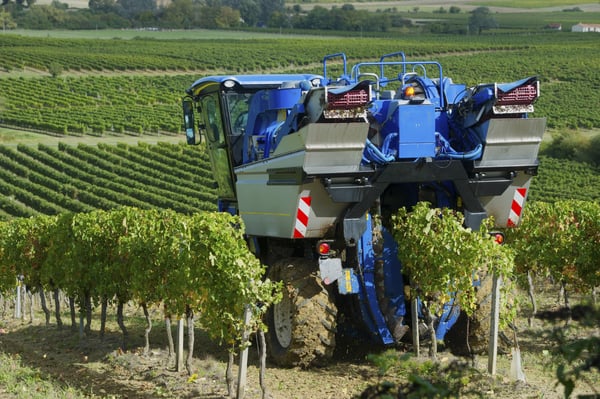 There’s something about a Zamboni that fascinates people, from the youngest of children to the oldest of seniors. With tag lines such as “nothing else is even close” or “a game changer,” the self-proclaimed romantic machine is even 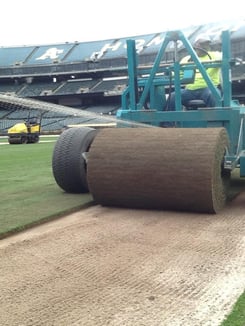 legendary in its own corporate mind. Frank Zamboni invented the world’s first self-propelled ice resurfacing machine in southern California where they are still manufactured. Previously, ice skating rinks were manually resurfaced over the course of three to four hours. Over 10,000 Zamboni machines have been built since 1949, and a machine was once driven across Canada from the Atlantic to the Pacific oceans.

West Coast Turf was founded in 1990 intent on becoming the West Coast juggernaut in the sod business. The company now boasts a lengthy clientele including nearly every MLB and NFL stadium on the West Coast; others in Florida, Texas and Arizona; dozens of professional training fields; three MLS fields; two California horse-racing tracks; 50-plus college and high school sports facilities; dozens of amusement parks, regional parks and community developments; and hundreds of golf courses.

Most of their equipment is highly specialized for their industry:

As of 2013, the iconic Maid of the Mist from Niagara Falls now has its own dry dock facility and a 78-foot-high marine crane. The muscular 157-ton crane allows the tourism vendor full reign over its maintenance operations and scheduling. The first Maid of the Mist steamboat began its sightseeing ventures to the falls in 1846. 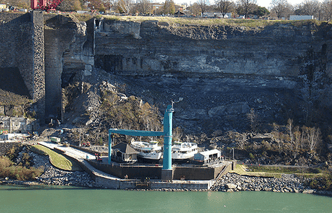 In a way, cruise ships themselves are not heavy equipment per se, but they could be. More importantly, though, a “fleet” of such equipment is used during the ship-building process.

Heavy-duty cranes unload building materials arriving on trains and trucks, and later lift pre-fabricated multi-deck segments in place before they are welded together. Ship building also utilizes forklifts abound; a variety of manual and robotic welders; industrial machinery that rolls, bends and shapes steel plates and pipe; hydraulic presses; and dozens of miscellaneous equipment such as winches, pumps, jacks and pullers. Everything is “bigger than life” as one would expect, but the end result is the creation of pristine cruise liners for all to enjoy on oceans and seas around the world.

It doesn’t take heavy equipment to hoist a bottle of wine, but the wine industry uses it throughout the production process, from the vineyard development stage to the distribution stage where forklifts move full pallets of wine boxes into delivery trucks. 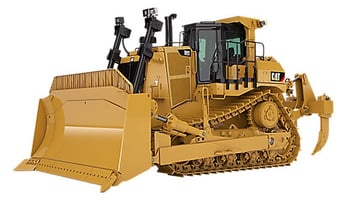 Vineyard development begins with an inspection of the soil where consultants dig six-foot deep trenches with backhoes to inspect stratum and soil types. Next, they bring in Caterpillar D9s to rip or homogenize the soil to remove unwanted hard pan layers. The rippers are the huge claws that trail behind the dozers.

Vineyards also use specialized tractors to negotiate narrow vineyards, and in larger operations, mechanical harvesters like the one pictured at the top of this story.

On the crush pad, cranes and giant forklifts are needed to install stainless steel fermentation tanks while forklifts are used extensively in the cellar to move racks holding two barrels each.

Forklifts are also used in dairy production to move tanks, vessels and kettles of milk and dairy products to various work stations for processing and packaging. 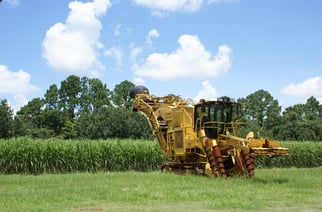 Similarly, breweries use forklifts to move containers of raw materials such as hops and wheat to masher vessels, boil kettles and whirlpools while they are also instrumental in moving full kegs and pallets of boxed beer on their way to distributors, retailers and restaurants.

It is not surprising to find a diverse group of harvesters working the farms of America, but some are rather peculiar. For example, sugar cane harvesters resemble the plated look of a triceratops, one of the dinosaurs featured in Jurassic Park. Meanwhile, other harvesters look more like portable space heaters or solar panels than agricultural gadgets. Finally, odd tractor designs seem to be favored by people worldwide. The Porsche Tractor Coffee Train is among the strangest, below. 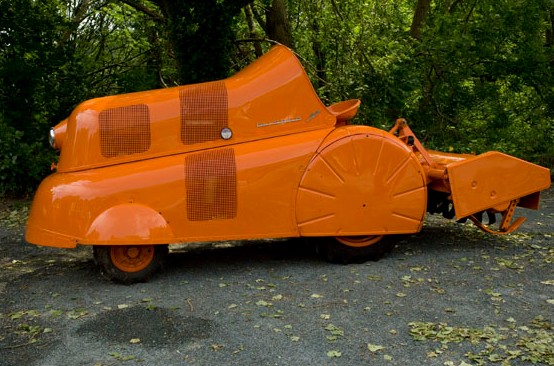 Most people know the plumbing industry uses plungers, snakes and augers to clear clogged drains and pipes, but it may come as a surprise to learn it also employs mega variations of vacuum cleaners. Whether mounted on towable trailers or occupying the better part of a 10-wheel truck, hydro or suction excavation systems play a major role in keeping the business world from screeching to a halt. These bona fide pieces of heavy equipment remove subterranean debris by funneling the powerful suction of high volume air flow through flexible piping systems.

In Touch with all Facets of the Business World

Heavy equipment was introduced by the Greeks circa 399 BCE with the invention of the catapult and later referenced in the 1st Century BCE by Vitrulvius in his Ten Books on Architecture.

Mules, horses and aqueducts have been replaced by petro-fuels, solar and aero power, but there’s a subtle degree of continuity between the heavy equipment of yesterday and today. Nearly all businesses are positively affected by industrial machinery whether they use it within their own industry or benefit from its use by suppliers or facilitators.

Payment systems are another fact of life in the business world where CrossCheck has over 30 years of experience providing check payment solutions to the heavy equipment industry.

With our Check Guarantee service at your fingertips, checks are approved at your point of sale in seconds via terminal, phone or the web before being deposited in a banking account. If an approved check is returned from the bank unpaid, it can be submitted to CrossCheck for processing and reimbursement. To learn more click below.