Every April, the Electronic Transactions Association, known as the ETA, holds its annual conference. This is the

Main Event for people working in the payments industry. You can see the agenda at the Transact16 conference website and register to attend. The show is typically held in Las Vegas every other year, and this year it returns to Mandalay Bay April 19-21. Last year it was in our backyard, San Francisco. It is the ultimate networking opportunity for anyone in what used to be called the credit card industry, but also has multiple seminars on current topics in “Payments,” as well as a very large trade show floor, which is challenging to cover in depth in the time available.

I have been attending this event almost from the beginning, when it was known as the Bankcard Services Association, and met in a small upstairs conference room at the Palmer House in Chicago with card tables in the hallway. I thought it might be interesting to provide some background on the ETA over the years, because most people I see at the show seem to be too young to have been in payments back 25 years ago. 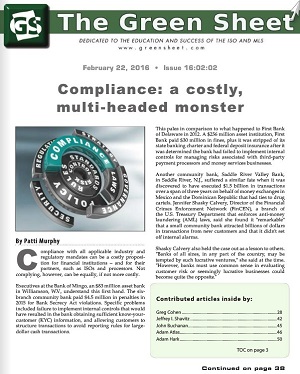 One of people most instrumental in founding the BSA was Paul Green, who was CEO of CrossCheck for 18 years (you likely know him as the previous editor of The Green Sheet, which is a 72-page publication that covers the bankcard industry more comprehensively than anybody else, since it comes out every two weeks). Paul’s original impetus was to just provide the “feet on the street” ISO with enough information for them to do their job. Now this might sound strange to you, but remember back in 1990, the card associations prohibited direct contact with anyone other than an employee of an issuing or acquiring bank. Practically speaking, this meant that an ISO could only talk to the “bankcard department” of their sponsoring bank, which typically provided no training or support or inventory management. Some of these banks were called “Rent-a-BIN” banks because they had minimal involvement in the whole process, other than their principal bank status at the associations.  And of the roughly ten thousand commercial banks at the time, there were only a few dozen which were principal banks in the acquiring business. ISO’s were given the sponsoring bank’s pricing and contracts, and that was it. Paul did some innovative things, such as publish the entire pricing schedule for both associations in The Green Sheet, which ISO’s had never seen before. Another big impetus was to identify the bad actors, since there was no real regulation or even ground rules in selling bankcard processing back then. But it was not easy; I have mentioned in another article that Bob Carr moved at an early association meeting to propose a bylaw that would prohibit convicted felons from membership, and this was voted down! (Through the Fires, Page 43)  But in 1996, the BSA became the ETA, and today there are over 550 member organizations from seven countries! The ETA is now the de facto voice of the bankcard acquiring industry, and there is strong participation from the major acquiring banks, processors, and the card brands too.

Looking back, the crowning accomplishment of the ETA is that the necessary degree of training and regulation and education has been accomplished purely by private industry, with a minimum of government regulation or legislation. This is pretty significant when you think about the size of the industry and the sheer volume of transactions and dollars being handled. Private enterprise stepped up to the plate to do it themselves. Today, the ETA has an active role in lobbying for the benefit of its members in Washington, D.C., and a professional staff which stays current on topics such as risk management, fraud management, government relations, compliance, technology, and provides useful information to its members via educational seminars, webinars, and regional events. After many years of work, the ETA has a professional accreditation for bankcard professionals as well.

The landscape has changed over the years at the annual show. Originally, the show attracted the salespeople who are the “feet on the street,” calling on merchants and getting signed contracts. Today, those people are scarce on the ground, and instead you are more likely to see industry executives, entrepreneurs, venture capital investors, and vendors. Given the enormous ferment in the payments industry right now, that is not too surprising.  There are other shows that address some of this same constituency, such as Money 20-20, the Bank Administration Institute, the Association of Financial Professionals, and the National Automated Clearing House Association. What was once an arcane little group is now Big Business, and each of these shows attracts thousands of people!

People attend to keep their certification, and certainly a large number of attendees are vendors who are staffing a booth, but I think that the main reason to attend is to meet people you would not otherwise have the opportunity to meet without traveling hundreds or thousands of miles. For many people, just one good meeting would justify the cost of the show, which is not cheap, when you factor in the registration, travel, hotel, and everything else. The ETA has also sponsored regional association shows, similar in format, but smaller of course, and these shows are more likely to attract the traditional ISO salesperson. One example is the Western States Acquirers, right here in California.

CrossCheck has been a member since the very beginning, and various people here have served on the committees that help run the ETA. We have always had a booth at the show, since the very first one, and found it to be a good way to meet our existing clients and new ones as well. Even though we have been in business for 32 plus years, we get a surprising number of booth visitors who say, “What do you do?” or even, “Who uses checks anymore?”  Once we explain our value proposition, they are usually surprised and we often find a potential reseller which we wouldn’t have met otherwise. I’m sure that all the vendors in the exhibit hall would say the same thing. We encourage you to stop by our booth 619 in the exhibit hall and you can make an appointment to visit with our Vice President of Partner and ISO Relations, Travis Powers, or our CEO, J. David Siembieda. See you there!

In the meantime, if you'd like to help your merchants mitigate risk, increase sales, save time and money, while building a residual income stream, fill out our free consultation form and we'll get in contact pronto.