While marveling at the variety of innovations vying for merchant’s attention at the Electronic Transactions Association Transact 2015 tradeshow coming up in San Francisco next month, we can’t help but notice that most of them compete for the same specific part of the payment’s landscape: consumer credit card purchases.

And while it’s true that a lot of money’s been made processing those payments, it’s not at all clear that it will remain as lucrative as it has been – especially since some competitors want to dominate the space for reasons that have nothing to do with making a profit off of it.

Part I: Several Lukes Take On the Two Darth Vaders

The first two assaults came from Walmart and Google.

Walmart has been suing MasterCard or Visa (or both) since the 1990s, claiming that their processing fees were too high. And in 2011 Google introduced the GoogleWallet, which set out to fundamentally change the way people initiated payments, even if they were still processed the same way.

Those two ideas have now morphed into a growing field of major competitors.

About half way through its marathon litigation (one trial is still ongoing), Walmart joined with several other major retailers to form its own payments processing company, called Merchant Customer Exchange, and its own payment processing brand, CurrentC.

And as soon as Verizon, AT&T and T-Mobile saw Google Wallet, they refused to sell Android phones containing it. Why? So they could make their own, of course.

Released in 2013 the consortium gamely named it after the divine daughter of the earth and sky who became the goddess of nature and children in Egyptian mythology. Sadly, that meant their product was called “IsisWallet” just as “I.S.I.S.” emerged as a horrific specter threatening civilization itself.

They’re scrambling to rename it “Softpay,” and Google is trying to buy it.

Since they didn’t collect fees from Google Wallet, it’s likely that no matter what they end up doing they will consider the data and the customer relationship far more important, and lucrative, than per-transaction fees.

Part II: Which Luke Has the Right Light Saber?

Noting that Google’s Wallet required merchants to buy new equipment, specifically a “near-field communications” or NFC receiver, CurrentC came up with an innovative idea: its phone app would pay by displaying a QRC pattern easily scanned by equipment many stores already own.

CurrentC will launch this year at over a hundred thousand locations in the U.S. – including, of course, every Walmart.

Following in Google’s footsteps, ApplePay arrived on the scene in 2014 with the NFC-enabled iPhone 6, currently accepted at over 220,000 locations. It requires merchants to own a NFC receiver, but since the payment is authenticated with the fingerprint reader built into the phone’s start button, early indications are that consumers perceive it to be safer. Because of this, it’s enjoyed a strong start.

Not to say that adds up to much – nationwide NFC payments make up a minuscule percentage of payments overall.

And if the most recent entrant into this space, LoopPay, has any impact, that will remain so.

To use it you slide your Android or iOS phone into a LoopPay case, open the app, and hold it near one of the ubiquitous magnetic stripe readers designed for swiping credit cards. LoopPay sends a magnetic pulse that the device can read as easily as physical plastic.

It remains to be seen if requiring the consumer to buy equipment will work better than requiring the merchant to buy it. In that context, it’s worth noting that the barrier to entry for merchants has basically disappeared anyway.

Square’s free credit card reader plugs into the headphone jack of your smartphone or tablet and lets anyone – literally anyone, including the kid mowing your lawn – accept credit card payments for a 2.75% fee. Upon seeing it PayPal leaped into the same market, offering a slightly more robust system for a comparable fee.

Given the tumult surrounding the adoption of phone-based payment systems it’s no surprise that a recent ETA and Goldman Sachs study found that almost two thirds of ISOs think it will be at least a few years before the method goes mainstream. 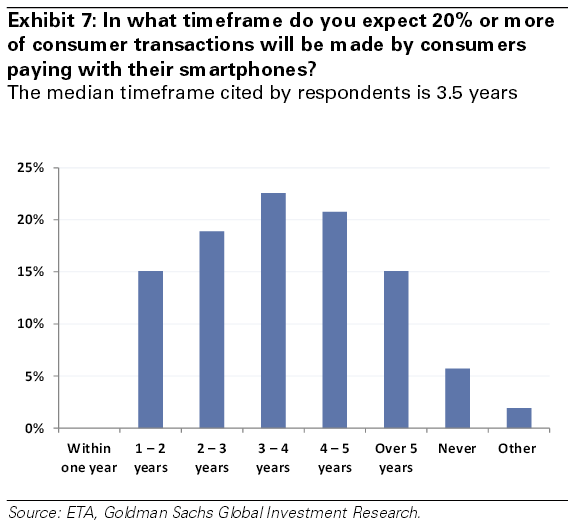 Meanwhile, other competitors have invented completely new ways of paying.

As though Square’s merchant technology wasn’t disruptive enough, they’ve now introduced SquareCash. Believe it or not, it lets you make payments by sending an email. Yup, an email.

After installing an app on your phone and attaching your debit card to it, you email your payee and CC "cash@square.com" with the dollar amount in the subject line. The first time your counterpart accepts she has to install the app, too, and attach her bank account.

After that, you’ve blown the lid off ACH entirely. The service is completely free, as is that of its main competitor, Venmo, which also lets people pay via text.

If all this seems a little far fetched to you, let us not forget the fringe: the international Bitcoin phenomenon, which originated as a hyper secure payment system requiring no central bank, no banking system, no nation states and no money.

It may have fifty million users by the end of 2015, and the volume of transactions per day rose steadily even as Bitcoin’s exchange value dropped significantly relative to the dollar.

The ETA study found that while basically no merchants accepted Bitcoin in 2014, as of March 2015 fully two percent of them did, citing low cost, no need for a bank, and the ease of cross-border transactions as main motivators.

Part IV: Meanwhile, Back in the Stone Age

Most merchants perusing this bewildering array of innovation want to bottom-line it by making sure that whatever they adopt, they do so as cost-efficiently as possible.

One thing they know they have to do is accommodate EMV cards before October, when they become liable for fraudulent charges if they don’t.

But, somewhat bizarrely given the breadth of technology flooding their market, the credit card industry has decided to throw a monkey wrench into this transition by failing to adopt the same EMV standard used globally.

Rather than “chip and PIN,” they have opted for the less secure “chip and signature” method. And why would they force everyone to adopt new technology that is clearly inferior to what is used in every other developed economy on the planet? Because they don’t think Americans want to remember another PIN number.

Needless to say, this decision has not given rise to widespread confidence. Andrew Szente, vice president of government affairs at the Retail Industry Leaders Association, a Washington, D.C.-based trade group, told the Wall Street Journal, “It is absolutely a concern, and we believe [the chip-and-signature cards] are a half-measure.”

U.S. lenders will issue about half a billion of the cards this year, generally as older ones expire, and by the end of 2015 half the cards in the country will have an embedded chip.

Costco has already offered a compliant POS terminal for less than $200, and Square has already released its EMV card reader for $29.

The chance that we’ll see a massive shift to any new payment method this year seems diminishingly small. Most merchants will opt to comply for the lowest cost possible, choosing to wait for consumer demand to motivate them to do anything else.

Of course we’re biased, but we can’t help but feel it’s exceedingly unlikely that businesses or individuals will begin paying each other large sums of money by typing the amount into an email’s subject line or handing over their business account information to an upstart phone app company.

In fact, the most recent Federal Reserve payments study soundly found that “billions of paper checks continue to be written by businesses each year,” and that “among large businesses checks represent more than half of payments sent and received; among small and micro businesses, these percentages are more than 70 percent and 90 percent, respectively.”

The Fed also concluded that no new payment method can yet challenge the role of checks as they are used today.

We think most merchants will reach the same conclusion, so be sure you can sell them what they actually want and need. Find out more here.