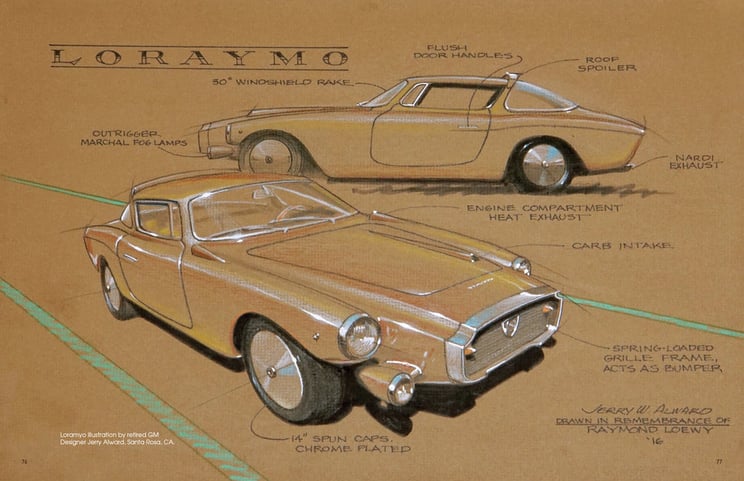 Elitch worked in cash management for several Fortune 500 companies, sold cash management services for major banks, and consulted for bankcard acquirers. He is a Certified Cash Manager and an Accredited ACH Professional with an MBA from New York University and a JD from Santa Clara University. But his credentials don’t end there. Elitch 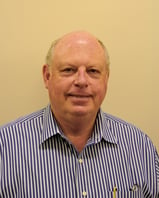 was the first cash manager at Charles Schwab and directed half of the middle-market cash management sales group for Wells Fargo.

He became involved with CrossCheck in the 1990s and was asked to join the team and assist with business development in 1999. He left to pursue other opportunities in 2003, but returned in 2010 to leverage his banking relationships with CrossCheck services.

Elitch, known by his first name around the office, is also a writer for publications such as The Green Sheet, VeloceToday and this CrossCheck Blog. He has an avid thirst for automotive history and collecting vintage vehicles. 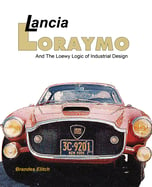 Brandes’ love for car design shines throughout the book. He has a deep understanding of design history that he's eager to share with the reader.

Readers can expect to gain a clear picture of the culture of car design at the time. Brandes illustrates the environment and period in which Loewy operated (the 1930s to 1960s), which serves to further illuminate the innovations that Loewy achieved.

Brandes embarks on a journey that takes readers down a road of Loewy’s creative visions and influences. Readers can gain a new perspective of America’s history by learning about the automobile designs of the times.

Raymond Loewy was a well-known designer of his era. He ran his own design firm that consulted for the largest industry titans. His firm designed the Shell, BP and Exxon logos as well as many many cars and numerous general household products. In some ways, Loewy could be considered the “Walt Disney of design.” The various images in the “Lancia Loraymo” book and the provided context should dazzle the creative side of many readers.

Brandes assesses Loewy as having mastered the balance between following his vision and offering the public products it was ready for. Through train and automobile designs Loewy captured an era of America. As Loewy himself said, “(I) immersed myself in the American Vortex.” 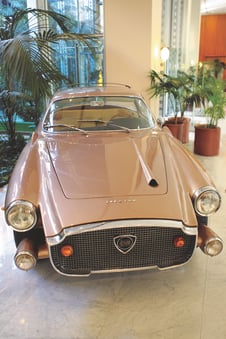 Lancia, an Italian car manufacturer, was virtually unknown in U.S. as the cars were pricey and produced in small batches. According to Brandes, Lancia was on the technical edge in 1920s to 1970s Europe. Filled with righteous integrity, the Lancia team focused on product innovation rather than turning a profit.

Believe it or not, Loewy picked the name “Loraymo” from his cable address, “LOewyRAYMOnd.” He worked with coachbuilder Motto in Torina and took almost a year to build the show car.

The rollout was sensational. The fresh, new automobile design was featured in almost every motoring publication at the time. The grille is mounted on shock absorbers to absorb impact, a concept Brandes informs readers was far ahead of its time. Loewy even created a new font for the body chrome name tag.

The Disappearance and Rescue

Loewy gave or sold the one-of-a-kind car to an associate who sold it via broker to a man named David Rives. Rives left the car in a shop in Van Nuys in the mid 1970s. It disappeared for 28 years.

Years later, an Alfa enthusiast named Marco Mercado visited Sampson’s Auto Wreckers in Sacramento and spotted the Loraymo. He promptly bought it and towed it back to his nearby shop.

Steve Snyder, editor of the American Lancia Club (ALC) newsletter, heard about the car from Mercado, bought it 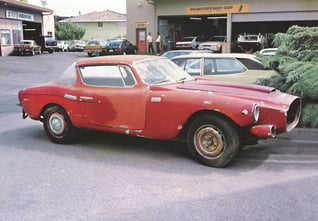 from him and towed it to his shop in Sunnyvale.

Snyder wrote to Armand Gigilio, president of the ALC club. ALC purchased the car and donated it to the Lancia factory museum, as it was the only Lancia car designed by an American.

The factory turned the restoration over to the Basso Shop, which had previously built the Lancia D-24 replicas using original parts. The restoration took place over a three-year period and the car was then donated to the Vincenzo Lancia Museum.

In 1962, the new president of Studebaker, Sherwood Egbert, hired Loewy to create a car design in five weeks, a near impossible job.

Loewy rented a house in Palm Springs near his own residence and brought in John Epstein from his New York office as project manager.

What came out was the Avanti, an instant collectable and the spiritual successor to the Loraymo. It remained in production for 20 years after its release.

The Loewy and Loraymo Legacy

Loewy was one of the most talented minds in the field of industrial design during his lifetime. In addition to  automobiles, he also designed trucks, rail cars, and airplanes.

Brandes sums up Loewy’s influence, motivations, and personality in three quotes attributed to the “artista”:

“The American Way of Life is at present the most advanced model on the planet. And I just happen to like advanced models. America has treated me with such decency, such fairness, that I will try to do my humble part with appreciation and gratitude.”

“Have a sense of humor. Be curious. And meet good-looking girls. They’re proof God exists.”

“Death doesn’t scare me, but it does bore me terribly.”

Parting Words About the Author

Brandes' son, Dave Elitch, is a highly regarded session and touring drummer based in Los Angeles who shares his father's love of vintage autos. The below photo shows him next to his restored 1970 Plymouth Barracuda that he purchased 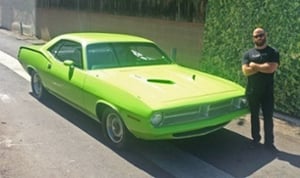 Without a doubt, Brandes’ favorite CrossCheck service is Multiple Check because people buying autos (including cars that may one day become collectibles) receive 30 extra days to complete down payments at new and used auto dealerships.

With Multiple Check in place, consumers write 2 – 4 checks with the same purchase date, and designate a deposit date for each one. Dealerships receive guaranteed funding as each check is deposited while consumers are able to buy the car of their dreams without credit or credit applications.

Multiple Check is also a favorite of many auto dealers because it reduces risk, helps increase sales that might otherwise not have happened, and streamlines the transaction process. Click here to learn more about Multiple Check.

Inbound Marketer with Crosscheck, dedicated to giving you clear and informative content that will add to your business practices.