Auto Dealers: What Cars of the Future Should Have Looked Like! 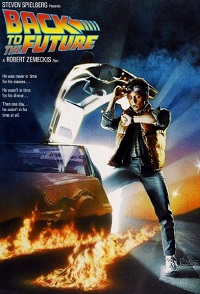 If movies are any indication, your car of the future is going to be a sleek rocket powered machine that always finds a parking spot directly in front of your destination.

In Back to the Future, for starters, a DeLorean was converted into a time machine. But in the closing scene the DeLorean became a rocket-powered car that tucked its wheels underneath as it rose like a Harrier jet fighter. When the futuristic Doc reappears he insists on bringing Marty back to the future saying, “Where we are going, we don’t need roads.” Who hasn’t imagined hopping into a rocket car and flying off to work like George Jetson?

James Bond movies always feature cars specially modified for “certain situations,” such as the Lotus Esprit in The Spy Who Loved Me that plunged into the water and sprouted fins, a periscope and propellers. Sales of the Aston Martin were jump started when it appeared in several Bond films. The most notably modified one was in Goldfinger, which had a passenger ejection seat (perfect for a drive in the country with the ex) and machine guns and rocket launchers for those all-too-common occasions (for Bond) when the bad guys are following you and shooting at your car. (Not recommended for the long commute when road rage might become an issue.)

In the real world car shows almost always feature “concept cars,” one-of-a-kind futuristic cars that look like they could fly up and out of the convention hall. These cars never see the light of day in most cases but it shows how innovative the automotive designs could be. A quick search on YouTube produced some very imaginative designs and some extreme futuristic looking prototypes. Want to see a Lamborghini SUV? Watch this short video:

Tesla’s line of cars may give us an insight into the future of cars since they are electric. They look similar to internal combustion cars but they sound entirely different. How might new power plants change the look of cars in the future? Tesla built its big battery pack into the floor to give the car a lower center of gravity, and it put a storage space where most cars have an engine. Eventually roofs may be large and flat to accommodate solar panels. And are three wheel vehicles in our near future? Hydrogen powered cars?

Recently Google showed off a car that could be navigated without actually being in it, sort of like a drone controlled with instruments from a remote location or programmed to travel a pre-determined course. In theory, you could pre-program a route and have the car follow the route to its destination without involving the passengers. The car can only travel 25 MPH and has large padded bumpers (for the obvious reason). What the car does not have is a steering wheel, accelerator or brakes. Sensors in the car allow it to slow and stop if there are obstacles in its path. It can even understand a bicyclist’s hand signals:

Although we may think we can guess what future cars will look like with some degree of certainty, we can be sure that the business of selling cars will remain pretty much the same. The dealership model is here to stay, even when cars can fly and get their energy from the sun. Now – and then -- dealerships will benefit from having a check guarantee system in place to make it easier for customers to manage large down payments or to handle large, emergency repair bills. Learn more here.