It resembles a plump R2-D2 from Star Wars at idle and a tall patio propane heater while powered up. Despite those unflattering visuals, a germ-zapping robot from San Antonio, Texas is living up to the hype that has overtaken the healthcare profession like wildfire.

The robot destroys viruses, bacteria and bacterial spores in less than 10 minutes per room where speed is an asset to cleaning operations. Launched in 2010, Xenex has garnered broad recognition in late 2016 as it approaches the 400 mark in hospitals using the robots.

According to its most recent report, the Center for Disease Control estimates that one in 25 patients contracted healthcare associated infections (HAI) in 2014. There were over 720,000 reported incidents in 2011.

How does it work?

High intensity ultraviolet light is produced by xenon flash lamps across the entire disinfecting spectrum known as UV-C, passing through the cell walls of bacteria, viruses and bacterial spores. The DNA, RNA and proteins inside the microorganisms are subjected to four types of cellular damage and ultimately destroyed. 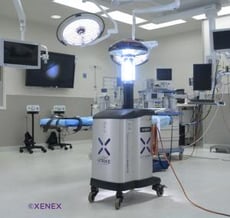 Xenex recommends robot quantities for each facility based on the total number of hospital beds. The unit cost is approximately $100,000, but that figure is a bargain compared to the $30 billion spent by the healthcare industry to combat HAI each year.

A germ-zapping robot would certainly stretch the budget of most medical offices, but Xenex offers affordable payment options.

Using the Multiple Check program, patients write 2 – 4 checks to cover the cost of expensive office procedures. The checks are deposited over 30 days according to a schedule agreed upon by them and the practice. Checks are guaranteed up to amounts specified in the service agreement, and patients receive the prescribed treatment. Learn more my downloading our free guide.