The construction industry underlies our entire economy the way a concrete foundation supports a building, and as it turns out innovations in concrete – which don’t come along very often – can give us tantalizing insights into the building supply business.

To see how, we should begin with the foundation of the construction industry: housing.  Starts in 2014 finally surpassed a million homes for the first time since 2007. But the year ended on an anemic note, with new home sales flat and existing home sales actually declining.

Optimistic prognosticators had hoped to see the opposite, and they thought that mortgage rates would go up as demand consolidated. The opposite happened – rates trended lower, falling around a point as banks competed for the shrinking group of people who met their new, much stricter requirements. 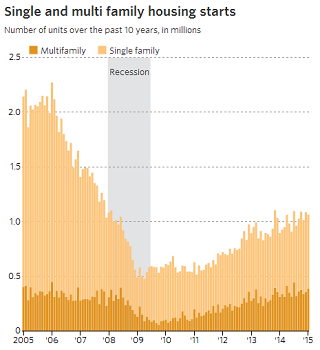 Builders who could flocked to the high end market, since today the wealthiest ten percent of the U.S. population owns 75% of the country's wealth (incredibly, if you extend this to the whole world, the poorest half of humanity owns as much as the richest eighty-five people).

While much is written about wealth inequality these days, the upshot for building materials is that single family homes, the bedrock of middle-class America, have slipped out of reach for many of our neighbors, and there’s little chance that situation will change in 2015.

Home sales didn’t pick up much last year, and even single family starts lagged behind the two previous years, which were arguably harder for most Americans.

In the same way rates dropped while banks sought buyers, home prices declined in a few parts of the country, such as Phoenix, for the same reason. 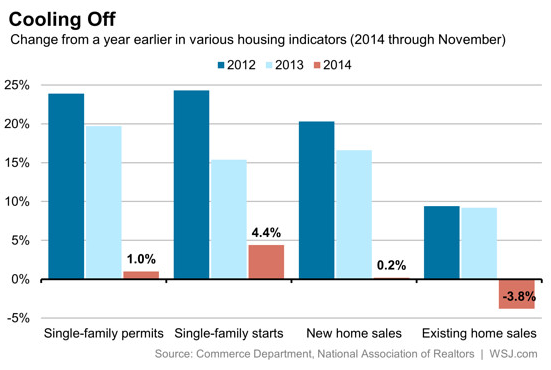 Millennials aren’t buying yet, and that’s the missing puzzle piece. They’re carrying student debt either can’t qualify or prefer to rent until they have become more financially secure. Thankfully, that puts upward pressure on rents, so eventually there may come a tipping point where some renters will prefer a mortgage for about the same monthly payment.

But most analysts don’t think this will happen this year, either.

Which brings us to the first lesson we can learn from concrete. Discovered in ancient times and used with increasing frequency ever since, builders pour about two tons of it for every man, woman and child on earth every year.

The materials to make it, obviously, are abundant, and once it sets it can maintain its structural integrity for thousands of years, as demonstrated by the Romans Pantheon’s dome, built by Emperor Hadrian in 126 A.D., which is still the largest unreinforced concrete dome on earth. 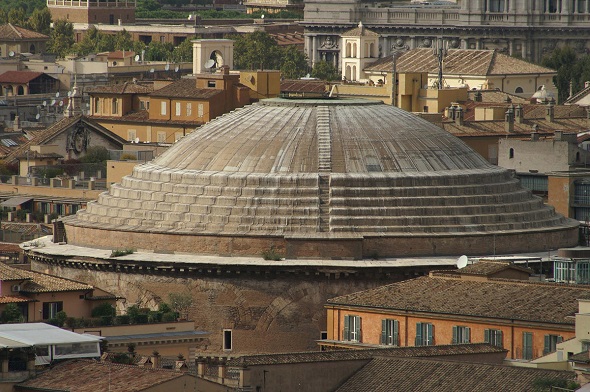 But spans and other structures made from concrete are subject to abrupt, catastrophic failure the instant a load exceeds a certain point. Rebar reinforcement helps, but if water gets to the rebar it will cause rust and expansion, which will eventually break the concrete from within.

Successful building materials managers and owners know that the profit margin for a business too tightly focused on one market or too thinly spread across several may be as brittle as a span of unreinforced concrete.

The last thing you’d want to do is back yourself into a corner where one or two missed payments from your biggest customers placed a load on your bottom line that causes it to suddenly collapse.

Many suppliers overcome this problem by expanding into other areas, and these days that may be more critical than ever.

Contractors have remained steadfastly optimistic for the past two years because they see clear signs that the housing and construction industries have begun to climb out of the recession. But the story changes radically from place to place.

While nationwide stagnant wages and low savings rates have slowed home appreciation, national averages clearly indicate that the market is primed for growth. Median household income is about $52,000 a year, and the minimum income you’d need to buy a home at the national average is a little bit less than that – around $49,000.

In theory, this means Americans can afford homes again.

The real world looks a lot different. In San Francisco, forty miles south of our corporate headquarters and by far the most extreme example in the country, you need to earn at least $142,000 a year to afford an entry-level home. Even in New York you can buy if you earn a mere $90,000.

On the other hand, you can get started in cities like Pittsburgh, Cleveland, St. Louis and Cincinnati if you earn in the mid-thirties.

Construction Dive magazine says builders “might want to pack up and flee” high priced areas, and so in 2015 suppliers might want to establish a presence in the lower priced regions where most analysts expect demand to emerge first. You might check this resource at Realtor.com to focus your thoughts on places near you that might be practical for expansion and low hanging fruit for the anticipated rebound.

If you want something to last hundreds of years, it has to be able to endure its environment while remaining the same at the core. For the Pantheon’s dome, this means remaining intact even as rain, wind, smog, war and the tides of history flow over and around it.

But for most businesses, and for many modern structures, survival depends upon a certain degree of flexibility.

For the structures, believe it or not, researchers at the University of Michigan have figured out how to make concrete slightly flexible.

Not only does this have the potential to make structures a great deal safer in earthquake-prone areas like ours, it also has the potential to create structures that can withstand vibrations and other variable pressures without degrading, and ones that can absorb the expansion from rusting rebar. Bridges and highways made from it might last as long as the Pantheon:

Most businesses, perhaps even yours, are like those test slabs of concrete. It may take a lot to break one, but it takes even more to break one that has the new additive.

Flexibility for your business might mean developing expertise in LEED certified green building materials, because what was a $106 billion industry in 2012 will more than double to a $235 billion industry by 2019.

And it might mean protecting yourself from those couple of missed payments that could break your bottom line – especially if part of your expansion plans includes increasing your C.O.D business.

We can help you there. If you’re like most of your competitors then practically all of your payments come in the form of checks.

You can turn your payments policy into a profit center by using some of our services to close additional sales and to make it easy for your customer to work with you. You can eliminate the payment risk associated with C.O.D., for example, as well as the risk that any big, important check will be returned.

After thirty-two years in business, we’ve learned how to be flexible, and we can tailor a solution to meet your specific needs. Find out how here.