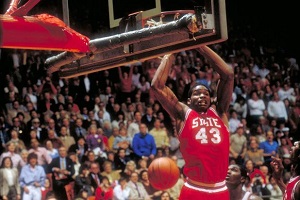 College basketball fans rejoice, selection Sunday this weekend kicks off a month’s long celebration of March Madness! Truth be told, it even goes into April.

So many questions have yet to be answered: Will a #16 seed finally beat a #1 seed? Which Cinderella University will be the darling of the ball? Will Kentucky be the first men’s team since Indiana in 1976 to go undefeated, and the only team ever to post a 40-0 record?

Last year we focused on the snubs, Cinderellas, and buzzer beaters. This year we’re all about the business side of March Madness. Like it or not; businesses small and large, far and wide, are effected , upside and downside by this three week frenzy dominating our sporting, and quite frankly, cultural landscape.

With 68 teams competing in March, we are bound to see a Cinderella or two busting brackets. Last March, the Dayton Flyers advanced to the Elite 8 after winning their first three games. No doubt a Cinderella run, and local retailers cashed in.

Posters, t-shirts, and apparel were flying off the shelves in Dayton, Ohio, for example, making it tough for stores to stay ahead of demand.

But it’s not just retail that sees record numbers.

Bars, restaurants, and sports apparel shops lick their chops each and every March because they know their numbers are about to get a huge boost – and not just at their point of sale.

Buffalo Wild Wings has outgained Standard & Poor’s 500 Index by an average of 5.8 percentage points each March for the past 10 years, and the three week March Madness frenzy is the catalyst. 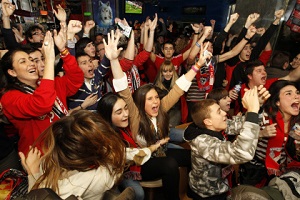 Walk into any Buffalo Wild Wings and it’s easy to see why. It’s a welcoming environment for college hoops fans. And understandably, this year the company intends to beat last year’s chicken wings sales of about 94 million.

And for fans that wish to watch at home while munching pizza? Domino’s outpaced the S&P 500 mark by 7.7 percentage points year-to-date.

Even if your retail establishment is not a typical March Madness hot spot selling beer, chicken wings, or pizza, there are other ways you can stimulate interest in your store and increase sales.

It just goes to show that brackets aren’t just for games – they can be used to generate store traffic, too.

Chances are you have your own bracket (or brackets!) or know someone who is watching every matchup with bated breath.

But…whether your employees are streaming games online, or obsessively hitting refresh on their phone’s sports app, March Madness in 2014 cost $1.2 billion for every unproductive work hour during the tournament’s first week alone.

Although scary to employers, this makes sense because there are five days of competition in the first week – with games being played most of each day. 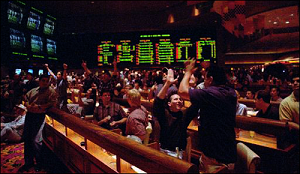 Bracket with caution, though, as wagering any amount of money on March Madness is illegal except in five states: Delaware, Montana, Oregon and Nevada.

That may be why many office pools – including yours? --are played with cash, eliminating any paper trail since all winnings are subject to taxation by the IRS – with or without a receipt.

It’s not all bad, though. Even with suffering productivity March Madness can help workplace camaraderie by encouraging team outings, happy hours and the like. Brackets are fun and all, but don’t say we didn’t warn you about the consequences!

It doesn’t matter what type of store you manage; you can’t afford to turn away any sale while all this madness swirls around you.

With the tournament looming, this is particularly important to apparel and restaurants where the purchase price can quickly dart past $100. The San Francisco Federal Reserve reports that for purchases over $100 or more, checks are the preferred payment method and consumers still write them in big numbers.

Let the madness begin, guarantee all of your payments and see your own record numbers in the process.