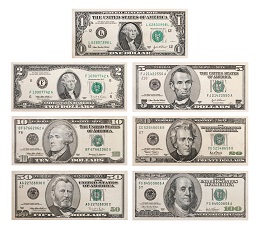 Cyndi Lauper… in a business blog? You know it! The “She’s So Unusual” singer had a hit with her song, “Money Changes Everything.” With her crazy shaved hair and colorful outfits, Ms. Lauper represented the 1980s perfectly. But who would have guessed she was actually quite retro, echoing a statement from way back in 1861? Today, the anniversary of the United States officially issuing cash currency, we want to celebrate the fact that money did change everything and share some interesting things that have happened in money's strange history.

Beads may have quite a reputation as the hot currency during Mardi Gras, but many people associate them as one of the earliest forms of currency. They certainly could fit in your pocket easier than a cow, shovel, animal skin, and blanket, all cited as early forms of payment. Just try to fit a cow through the payment slot the next time you hit the drive through.

Forget the lottery tickets, it’s your kitchen table that’s going to make you wealthy. Or it could have, if you were able to beam yourself back to Roman times, where soldiers were actually paid in salt. This common commodity, now sold for pennies in containers that could satisfy an entire Roman city, was extremely rare in ancient times. Other sources of “money” in your kitchen cabinets? Tea leaves, barley, grain, and corn were all at one time used as money.

We’re talking some seriously heavy metal here, minus the hair bands and glam rock. Metal was another early payment method, coming into popularity because it was lighter than those cows. Metal payments also rose because they didn’t rot (like grain) or break (like tea leaves). Back in the day, “metalheads” paid with their chunk of silver, for example, and merchants used scales to weigh the pieces. So that merchant didn’t have to reweigh every time, a system of marking and scoring was put into place. And the chunks of iron, bronze, gold, silver, and copper that predated most other payment forms actually led to the coins we use today.

So people were getting pretty tired from dragging around pockets full of iron and cows. Although the United States is usually on the forefront of innovation, it followed the crowd in terms of check adoption rates. Paper checks actually first started gracing merchants’ equivalents of cash registers in the first millennium of the world, in the eastern Mediterranean. There, they were called sakks or chak, basically a “merchant’s written instruction ordering a bank to make a payment.” Checks become a popular payment option in sixteenth-century Europe, finally hitting the USA in the nineteenth century. Everyone was feeling lighter.

Although instances of “cash money” were noted throughout the States as early as 1690 when the Massachusetts Bay Colony printed paper money to cover military expeditions, it wasn’t until March 10, 1861 that they were released to the general population. One year before, the US Treasury Department created Demand Bills in $10 denominations featuring President Abraham Lincoln. They quickly took on the moniker “greenbacks” from their coloring. And although money changes everything, much of the original design remains solid: the geometric patterns, Treasury seal, and engraved signatures continue to today to counteract counterfeiting.

No one’s going to disagree with Cyndi Lauper that our world revolves around money. And to build on what she has to say – money changes everything, but money also changes. In a few centuries, we’ve gone from cows to sodium particles to paper. What’s in the future? The future is now with payment tools like Remote Deposit Capture (RDC), and it’s green. With Remote Deposit Capture there are no more trips to the bank to deposit checks. No more gas, no more carbon, just money in your bank account fast! Check out more information here …