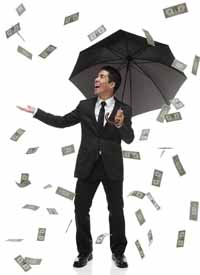 It’s March, and if you feel like it’s madness that you’ll never find the pot of gold at the end of the rainbow, don’t lose faith. You don’t have to be Irish, a leprechaun, or even particularly lucky to feel shades of green this month. March is unofficially money month, so come along with us as we see why this time of the year is officially paved with dough.

What’s In Your Wallet?

On March 4, 1789, the US Constitution was signed, governing the way we conduct our daily lives centuries later. Paper checks weren’t yet a popular payment method. Article I, Section 10, Clause 1 gives us some insight into how people were paying back then: “No State shall make any Thing but gold and silver Coin a Tender in Payment of Debts.” Can you imagine reaching into your purse or wallet and coming out with a handful of silver to pay your rent or medical bills today?

Can You Hear Me Now?

He put a ring on it! It was March 7, 1876 when Alexander Graham Bell patented the telephone, which paved the way for all of our mobile technologies of today. If you thought the brick-sized cell phone models of the early 1990s were bad, imagine what Bell was originally dealing with. Without Bell’s phone, we wouldn’t be able to offer technology like remote deposit capture, where check images are instantly captured by scanners, uploaded to the internet, and reported to your bank – saving you enough money and time to really call home about.

Are You the Car?

Maybe people in 1933 got bored of the telephone, because it was the same day of the year that family game night staple Monopoly was invented. Between arguing whether to be the cat or the car and whether those railroads ever paid off, many people got their first introduction to the power of paper money through Monopoly’s lessons. If you don’t spend wisely, you might end up homeless or in jail. If you run a business (a Monopoly hotel, of course) and don’t protect your revenue stream with options such as check guarantee, you might find yourself folding as well.

March 25 saw a melting pot of six major Western European countries coming together into a single, integrated economic market called the European Economic Community (EEC). The nations involved in the pact sought a way to enhance peace and liberty for their people. Members saw improvement by leaning on each other and working together for the greater good. Your financial lesson? You don’t have to do it alone. Lean on a check guarantee company that offers 24/7 customer service, available when your business needs it most.

Way before Ken Jennings made his historical run on the show, Jeopardy premiered on March 30, 1964. Although the pots were smaller, the game still afforded some quick free money for smart players. Smart business owners know that in most cases, there’s no real thing as quick free money, and they take actions against jeopardizing their businesses. For them, and yourself, that pot of gold is often check guarantee products. With a range of options including stop payment, multiple check, and check verification, you can make March your month to hit it big as well.