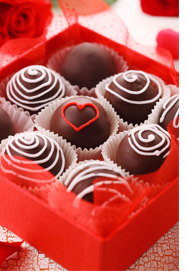 "All you need is love, but a little chocolate doesn't hurt," said Peanuts' creator Charles Schulz. How about over 50 million pounds of it? That's how much chocolate is sold during Valentine's week leading up to the big day. And chocolate isn't the only thing bought to seal the deal on February 14. The top gifts for Valentine's Day, in addition to candy, are flowers, jewelry and a romantic night out. These are presented along with a card filled with romantic sentiments. Add it all up and total spending for the holiday this year is expected to reach $18.6 billion.

Retail forecasts from the National Retail Federation indicate that spending will be up slightly from last year, with an impressive $130.97 spent per person up from $126.03 last year. In addition to chocolate, we buy 8 billion conversation hearts (aka Necco Sweethearts), over 224 million stems of roses, and 145 million greeting cards, not including classroom cards. Anyone who was waited too long get a reservation will tell you, we also spend lots on a special dinner out.

In addition to our sweethearts we purchase gifts for friends, co-workers, other family members and our pets. A survey from Pets Adviser found that many pet owners plan to give their pets a gift this year. The most popular gifts for our furry friends? Special toys, treats, an outing or a new bed.

Valentine's Day is the number one holiday for florists. Almost thirty percent of adults purchased flowers or plants as gifts for Valentine's Day in 2012 and spending is estimated to top $1.9 billion this year. Sort of like a Black Friday for flower shops, many florists will do the majority of their yearly business the week of the holiday and work around the clock the day of to fill orders and delivery before the day is done.

Of course the big winner for Valentine's Day this year could be the jewelry industry. Jewelers are looking to rake in $4.4 billion in heart-inspired bling. According to an American Express survey there will be in increase in marriage proposals this year with six million people planning or expecting a marriage proposal on Valentine's Day, up from four million in 2012. Average estimated cost per engagement ring is $2,410 according to the study.

Valentine's Day is not just a U.S. holiday. This special day is celebrated in Canada, Mexico, the United Kingdom, Australia, Denmark and Japan, too. Good thing those Sweethearts come in Spanish!

By the way, men traditionally spend more than women. Men are expected to dish out $175.61 almost twice that of the $88.78 expected from women this year. Whoever said all is fair in love and war might want to rethink that!

Are you increasing how much you spend on Valentine's Day this year? Let us know.