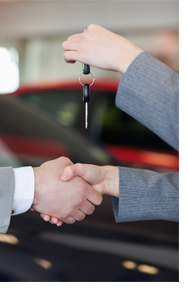 Get ready... 2013 is expected to be a banner year for automotive dealers if the predictions for a big, big year in auto sales ring true. After a healthy and happy December for US auto dealerships, auto industry analysts are forecasting new car sales to continue at pre-recession levels for the upcoming year. Wall Street, auto dealers and auto buyers are all cheering this news!

December sales rose 9 percent, contributing to a sales increase for the year of 13.5 percent.Throughout 2012 nearly 14.5 million new vehicles were sold, the highest amount since 2007, according to research from Reuters. The momentum is expected to continue in response to ongoing low interest rates, an improved housing sector and some exciting new offerings from the major automakers. With consumer confidence returning, car owners are shopping to replace the aging vehicles they've been hanging on to over the past few years.

US automakers had gains of 5 percent in December. Bigger increases came from foreign automakers Toyota and Honda rebounding from shortages after the Japan earthquake. Toyota reported a 9 percent increase and Honda reported an increase of 26 percent. Sales were also up for luxury brands including BMW.

Sales for 2013 are expected to be just as solid as 2012, if not more so. Research firm Polk is expecting US auto sales to hit 15.3 million vehicles.  GM and Ford are also predicting sales of over 15 million new vehicles and Toyota is forecasting 14.7 million.

This positive news is sure to be a topic of conversation at the upcoming NADA Convention and Expo in Orlando, February 8 - 11. Aptly subtitled "Catch the Momentum," this annual conference by the National Automobile Dealers Association has lots to celebrate this year. The conference is expecting over 8500 dealers, owners and managers to attend. CrossCheck is a returning exhibitor to this annual event and will be set up in booth 963, demonstrating our remote deposit capture service designed specifically for automotive businesses.

As an automotive dealer, you can prepare for success by providing your customers with payment options such as a Future Deposit/Multiple Check program that offers your customers payment flexibility. Check out this blog for more details on our NADA booth demos and giveaways.

Are you expecting sales increases in 2013? Leave a comment or stop by and see us at the NADA Convention, booth 963 and let us know what you predict for the new year.