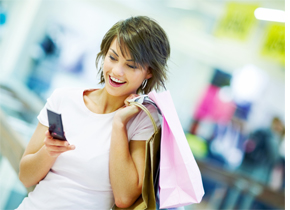 The holidays are all about tradition, right? Year after year we visit Santa, bake cookies, decorate the tree, attend parties, light up the front yard, and shop, shop, shop. But our shopping habits have changed over the past few years, partly because of the economy and partly because of technology. Layaway, early shopping, discounts, online spending and mobile payments are challenging tradition and may likely become the "new normal." Here's a look at some new habits that are changing the way we shop during the holidays.

Layaway. It may not be a new concept, but layaway programs have seen a resurgence in popularity over the past two years. With a tough economy, new frugal sensibilities and limited access to credit for many consumers, store layaway programs make sense. Large chains, including Walmart, Toys 'R' Us and Kmart are promoting it far and wide and have reported extensive use of the programs. Consumers are reducing their reliance on credit cards and seeking alternative ways to pay for large purchases. Programs such as layaway or a Multiple Check service offer payment flexibility without the high interest.

Earlier openings. Want to get rid of the family on Thanksgiving night? Send them shopping. Used to be that Black Friday was the "official" opening day for holiday shopping but then stores started opening in the wee hours of the day each competing to see who could open the earliest. The 6 am opening become 5 am became 4 am, became... midnight. And if it's midnight, it might as well be Thursday. Though some retailers have taken a stand by refusing to open on the holiday, many retailers including Target, Sears, Old Navy, Gap and Kenneth Cole opened their doors to an eager bunch of post-Thanksgiving dinner shoppers this year. The National Retail Federation reported that 35 million Americans visited retailers’ stores and websites on the holiday this year.

Promotions and discounts. It wasn't that long ago that holiday sales didn't start until December 26. As retail got more competitive for the holiday dollar, stores began offering up Black Friday discounts and early bird specials as incentives to get shoppers through their doors first. Black Friday discounts and circulars have traditionally been kept under wraps but over the last few years some of these doorbuster specials have been posted online and leaked to the public. Taking on a "if you can't beat 'em, join 'em attitude" this year, some stores including Walmart, publicized their specials well in advance. What's more, some of these doorbuster sales were extended as Black Friday discounts (which started on Thursday, in some cases), lasted all weekend long. Today's consumers are demanding discounts in store and online, too.

Mobile purchases and payments. Want to score the best deal, use your phone. That's what consumers did in force on Thanksgiving weekend. According to IBM's Digital Analytics Benchmark survey, 24% of shoppers used a mobile device to visit a retailer's website over Thanksgiving and Black Friday, an increase from 14.3% last year. While in the store, smart phones were the most commonly used mobile device to look up information on retail websites, while tablets, most likely an iPad, were used more often at home. We're not only surfing with our phones, but we're paying also. Juniper expects mobile payments by smart phone to surge to more than $1.3 trillion by 2017.

Online shopping. Consumers have continued to embrace ecommerce. This year about a third of shoppers over the holiday weekend shopped online. Forrester expects ecommerce to grow by 15% this year, a much higher increase than the expected 4-5% growth for overall holiday sales. As consumers, we like the convenience and ease of comparison shopping via the Internet. With the abundance of free shipping offers and loyalty programs, online orders will continue to grow.

Searching and shopping for the perfect gift will remain an important part of our holiday traditions. How we do it, when we do it and how we pay for it... that's evolving. Have your shopping habits changed? Tell us how you find and buy the perfect gift. Happy holidays!