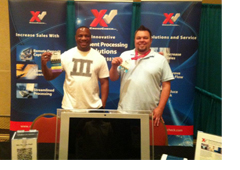 Now that the 2012 HFIC has come to a close, and I’ve had some time to reflect on the past six days, I have to consider myself and my company very fortunate to be partners with the NHFA and WHFA. As I stated in my previous blog post this was the first time CrossCheck attended this conference. Prior to the conference, Jason Lindell and I had no idea what to expect. What we experienced was better than we had ever imagined! Compared to the Las Vegas Market and High Point, there was substantially less traffic, but a much more intimate setting. This afforded us some valuable face time with association members, current clients, fellow vendors and the staff at the NHFA and WHFA.

The first night was all fun as we broke off into teams and played a variety of games including but not limited to football toss, quarter toss, bean bag toss, hula hoop challenge (which I’m terrible at by the way), and my personal favorite, “drop it like it’s hot!" Needless to say, this was a night where everyone let their hair down and had some good old fashioned fun!

Monday morning it was time to get down to business. We received visits from several prospective retailers all inquiring about our Remote Deposit Capture Solution along with our 90 Day Multiple Check option. We had several entries for the iPad giveaway and the lucky winner was Mr. Paul Sanford of Jerome’s Furniture in Southern California.

During the day there were two breakout sessions where retailers were able to sit and listen to speakers touch on a variety of topics ranging from the benefits of utilizing social media to sales and marketing trends in 2012. The breakout sessions were then followed by the Let’s Make A Deal Bonanza. At the conclusion of the Bonanza, Jason and I attended dinner with the Next Gen group at Sammy’s Woodfire Pizza in downtown Palm Desert. Despite the heat being a factor the food was excellent and the company was even better! I particularly enjoyed interacting with the Next Gen group as they provided various insights as to the direction and the future of the home furnishings industry as a whole. Once we returned to the resort we attended the release party for the new RetailerNOW magazine hosted by Melissa Dressler. As expected, we all had a great time!

Tuesday started off with breakfast and networking with the retailers followed by two breakout sessions. The closing general session featured Tim Sanders, former CSO at Yahoo! He gave an incredible talk on harnessing the power of total confidence. If you missed his talk you will definitely benefit from picking up his book, Today We Are Rich.

The evening concluded with an incredible awards dinner titled “Living The Dream / An Old Hollywood Red Carpet Experience.” This was truly a memorable night as everyone that attended walked down the red carpet flanked by paparazzi and answer-seeking reporters. There was a live band called Swingtown with an incredible singer. They really set the mood with jazz and swing music. The subsequent awards ceremony recognized various members in the industry for their contributions to the conference and to the industry as a whole. When we made the decision to attend conference we did so knowing to expect something special but nothing like this!

Now that the dust has settled and we’re back in the office here in sunny Northern California, the focus is on follow up. During the conference we were able to interact with some very prominent members of the home furnishings community and talk about ways we can help them increase sales, improve cash flow and reduce risk. Now it’s time to deliver and turn prospects into satisfied clients!  Be sure to take a look at our Facebook album that highlights our experience at the conference along with a video by HFIC. If I missed seeing you at HFIC, I hope you'll email me or give me a call.  I look forward to seeing you at future events.